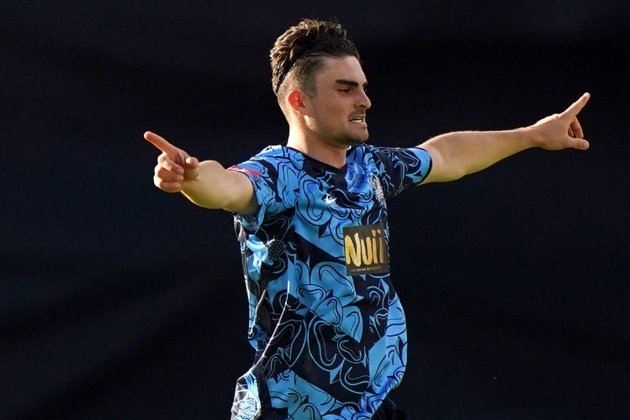 Hobart Hurricanes have signed another Yorkshireman, Jordan Thompson, ahead of the BBL season as they chase an elusive title.

Thompsom, a 25-year-old allrounder, was pursued by Hurricanes due to his unique skill set as a hard-hitting pace-bowling allrounder. He made two half-centuries in last season's Vitality Blast in England, striking at 167 across his career, and has been a wicket-taker with the ball claiming 34 wickets in 36 innings.

Thompson joins Yorkshire team-mate Harry Brook in Hobart after the pair put on an unbeaten 141-run stand against Worcestershire earlier this year.

"I'm really excited to play in the Big Bash for the first time," Thompson said. "Back home, it's a tournament we watch with great interest during the winter months, so I'm looking forward to meeting up with the team and experiencing it for myself.

"It will be great to work with a new bunch of players and coaching staff, and I'm looking forward to learning as much as I can and playing the role that the team needs me to."

Thompson rounds out Hurricanes' squad. The side will be largely unaffected by international duty with captain Matthew Wade set to his first full season since 2018-19.

Over 1,300 evacuated after volcano rains fire on Indonesian villages

JAKARTA, Indonesia: Rescue personnel in Indonesia are facing the arduous task of looking for survivors in villages blanketed by searing ...

On Wednesday and Thursday of this week, U.S. President Joe Biden will host a virtual "Summit for Democracy." The gathering ...

NEW ORLEANS, Louisiana: At least ten passengers and crew members onboard a Norwegian Cruise Line ship that docked in New ...

LONDON, England: A Thai conglomerate, the Central Group, is set to buy luxury UK department store group Selfridges for up ...

CHELMSFORD, England: There will be no shortage of turkeys for British consumers this Christmas season because of the foreign farm ...

After decades of delays, Shell Oil gives up on UK's Cambo oilfield

LONDON, England: Shell Oil announced this week that it has abandoned its plans to develop the Cambo oil field west ...

LONDON, England: The United States, United Kingdom, European Union, and Canada have agreed to tackle the ongoing migrant crisis on ...