Imprisoned Assange could get married by New Year 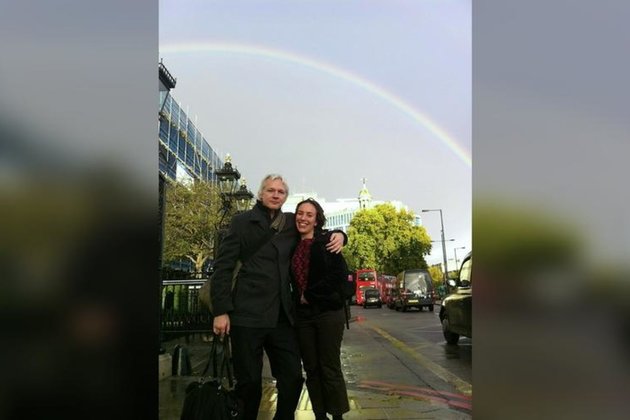 Julian Assange and his fiancee Stella Moris have formally registered their intention to get married in maximum security Belmarsh prison, where the Wikileaks co-founder is being held.

"Today we notified our intention to marry. It will take at least 28 days for that to be cleared. We don't have a date planned yet because it will depend on the authorities. It could be as soon as before the New Year," Moris told journalists on Wednesday after visiting Assange in the maximum security London prison.

She added that the bureaucratic procedure took place in a "legal room" of the prison and that it was nice to see Julian "in a different space" for the first time in the past 2.5 years.

"It was a happy moment that we could actually proceed, he was wearing a suit and a dark red tie, his hair was up in a bun," Moris said.

The couple, who share two young sons, does not have a date for the wedding yet, but is looking forward to marrying after a few years of being engaged.

"We want to live our lives and do what is in our control," explained Moris, adding that during the registration "It felt like we were treated as human beings for a change."

Assange's fiancee confessed that she is not giving up hope that, with a judgement on his extradition case due at any time, he could be free by Christmas and the wedding could take place outside the prison, where his mental and physical health are deteriorating.

The couple has previously accused Belmarsh authorities and UK government of "illegal interference" with their "basic right to marry," prompting Moris, who is a lawyer, to initiate the legal action. On November 11 she announced that the permission had been finally granted.

The UK High Court is expected to rule on the appeal by the US against a lower court decision to deny Assange's extradition to America on grounds of his poor mental health. The Wikileaks co-founder faces up to 175 years of imprisonment if extradited to the US, which accuses him of violating the Espionage Act over the release of thousands of classified documents on Iraq and Afghanistan. Assange supporters claim that he was doing exactly what the journalistic profession required him to do, and therefore his persecution represents a threat to journalism in a broad sense.

Over 1,300 evacuated after volcano rains fire on Indonesian villages

JAKARTA, Indonesia: Rescue personnel in Indonesia are facing the arduous task of looking for survivors in villages blanketed by searing ...

On Wednesday and Thursday of this week, U.S. President Joe Biden will host a virtual "Summit for Democracy." The gathering ...

NEW ORLEANS, Louisiana: At least ten passengers and crew members onboard a Norwegian Cruise Line ship that docked in New ...

LONDON, England: A Thai conglomerate, the Central Group, is set to buy luxury UK department store group Selfridges for up ...

CHELMSFORD, England: There will be no shortage of turkeys for British consumers this Christmas season because of the foreign farm ...

After decades of delays, Shell Oil gives up on UK's Cambo oilfield

LONDON, England: Shell Oil announced this week that it has abandoned its plans to develop the Cambo oil field west ...

LONDON, England: The United States, United Kingdom, European Union, and Canada have agreed to tackle the ongoing migrant crisis on ...