'More to come': Hamilton after claiming second podium of season in Canada 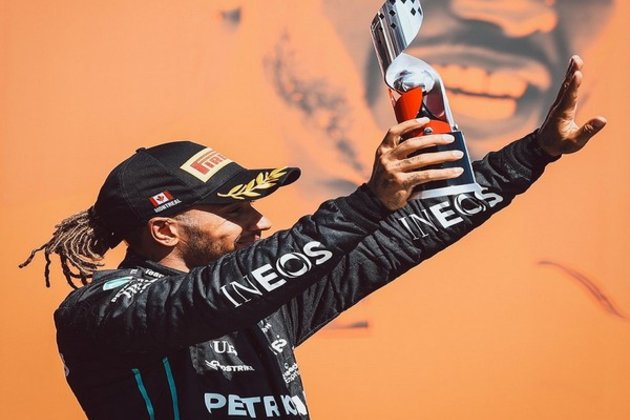 Montreal [Canada], June 20 (ANI): Lewis Hamilton was delighted to bring his Mercedes home on the podium in Sunday's Canadian Grand Prix - only the second time this season the seven-time champion has made the rostrum.

After taking a wrong set-up direction in Friday practice, Hamilton turned things around in qualifying to secure fourth on the grid. He then went one better in the race, finishing third behind Red Bull's Max Verstappen and Ferrari's Carlos Sainz - with a level of pace that reassured him there's more performance to be unlocked from the W13.

"It feels great to be in amongst the battle," said Hamilton, who beat teammate George Russell for only the second time this season. "For a second I was kind of keeping up with these guys. It's given me and the team a lot of hope that there's more to come from this car, the potential is there.""When you get a full race distance you find a lot out with the car. A lot to take from today. Got really good reliability. Great work from the team. Just got to keep our heads down. I know where I'm losing to these guys, so that's where I'm going to focus on attacking to improve."Hamilton admitted it was special to get such a strong result at the Circuit Gilles Villeneuve - a track on which he has enjoyed so much success over his career, winning on no less than seven occasions, the first time with McLaren way back in 2007.

"It was honestly one of the best feelings of the year to be back, especially in Montreal where I got my first win 15 years ago," he added. "And to be back up there, to feel the atmosphere, and the crowd was pretty special."Next stop will be Hamilton's home race at Silverstone, where he hopes the fast nature of the track will suit the Mercedes, assuming they can keep the bouncing issues that have plagued much of their season under control.

"It's better in medium and high-speed corners than low speed, but we have bouncing so don't know how it's going to be in Copse," he said of his prospects for the British Grand Prix, which he heads to positioned sixth in the drivers' championship on 77 points, two places and 34 points behind his compatriot team mate.

Om Sunday, Max Verstappen claimed his fifth win in the last six races at the 2022 Canadian Grand Prix, withstanding a late onslaught from Ferrari's Carlos Sainz, as Mercedes' Lewis Hamilton took his second podium of the season in P3.

Verstappen was looking well-placed for a comfortable victory over Sainz at the Circuit Gilles Villeneuve when a Safety Car was called on Lap 49 of 70, after Yuki Tsunoda hit the Turn 2 barriers after exiting the pits. (ANI)

French urged to conserve energy use to prepare for winter

PARIS, France: Amidst shortages and soaring prices caused by Russia's invasion of Ukraine and subsequent supply cuts, the heads of ...

At this week's G7 meeting, imports of Russian gold to be banned

WASHINGTON D.C.: In the latest in a series of sanctions aimed at further isolating Russia economically over its invasion of ...

MAGWAY, Myanmar - At least eight resistance fighters were killed on Wednesday when junta troops intercepted a truck they were ...