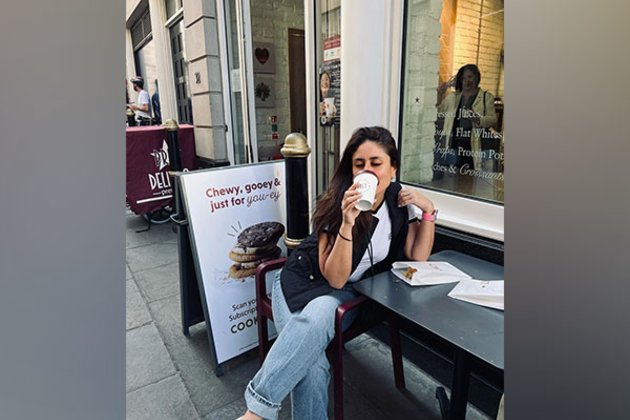 Mumbai (Maharashtra) [India], June 20 (ANI): Looks like Bollywood's royalty Kareena Kapoor Khan is on a work break! The 'Jab We Met' star is currently in London from where she shared a glimpse from her much-needed break.

On Monday, the 41-year-old star took to her Instagram handle and posted the first glimpse from her vacation in London, she captioned the picture, "Waited two years for you baby ...Pret .. Sipping my coffee Coffee Lover "In the picture, Kareena could be spotted striking a pose with a cup of her favourite coffee at the popular British eatery 'Pret'. Our 'Bebo' could be seen wearing a white shirt underneath a sleeveless black gilet along with a pair of light-hued denim jeans.

Reacting to the post, Kareena's friend, Producer Rhea Kapoor commented, "She has arrived."Kareena's co-star Actor Jaideep Ahlawat, who will soon be seen sharing the screen with Kareena in their upcoming Sujoy Ghosh adaptation of The Devotion of Suspect X wrote in the comment section, "@kareenakapoorkhan.... Yeeee Yeeee ... Vacation time ... after so much hard work. Enjoy."For the unversed, Kareena's OTT debut is a murder mystery and will stream on Netflix. It is a screen adaptation of one of Keigo Higashino's most acclaimed works, 'The Devotion of Suspect X'. It is based on a story of a single mother who thought she had finally escaped the clutches of her abusive ex-husband but things do not really go her way.

The project which will mark Kareena's OTT debut will also star Vijay Varma and Jaideep Ahlawat in the prominent roles.

Meanwhile, on the work front, Kareena is also awaiting the release of 'Laal Singh Chaddha' starring Aamir Khan in the lead role. The movie is set to release in theatres on August 11, 2022. (ANI)