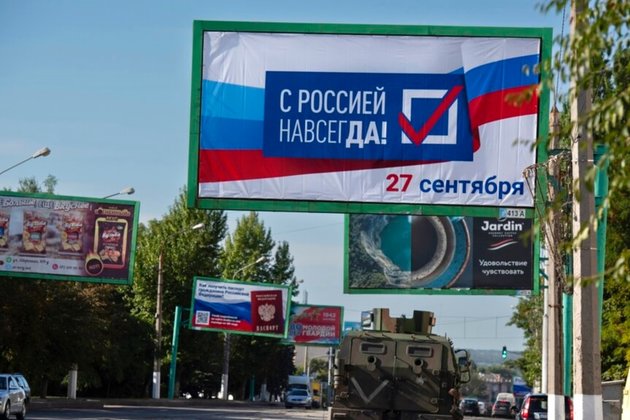 Russian-orchestrated voting has begun in occupied regions of Ukraine in referendums that ask voters if they want their regions to become part of Russia.

The voting, widely viewed as a way for Russia to justify the annexation of the regions, has been widely condemned by the West.

The Organization for Security and Cooperation in Europe said the referendums are illegal.

"Any elections or referenda on the territory of Ukraine can only be announced and conducted by legitimate authorities in compliance with national legislation and international standards," the OSCE said in a statement. "Therefore the planned 'referenda' will be illegal."

Friday's voting follows Russian President Vladimir Putin's announcement that he intends to call up 300,000 more troops for his "special military operation" in Ukraine.

Putin said in a televised address this week the mobilization of reserves, which followed Ukrainian gains in a counteroffensive in northeastern Ukraine, is necessary to protect Russia's homeland and sovereignty.

Putin said the West is trying to weaken and destroy Russia, and that his country will "use all the means at our disposal to protect Russia and our people."

Street protests against the mobilization erupted in Moscow and other Russian cities, with police arresting 1,300 demonstrators.

The British Defense Ministry said in its intelligence report Friday: "In the last three days, Ukrainian forces have secured bridgeheads on the east bank of the Oskil River in Kharkiv Oblast. ... To the south, in Donetsk Oblast, fighting is ongoing as Ukrainian forces assault the town of Lyman, east of the Siverskyy Donets River, which Russia captured in May. The battlefield situation remains complex, but Ukraine is now putting pressure on territory Russia considers essential to its war aims."

King could step in if Malaysia parliament cannot choose leader

KUALA LUMPUR, Malaysia: As support for a conservative Islamic alliance prevented major coalitions from winning a simple majority in its ...

BUFFALO, New York: Just ahead of the busy Thanksgiving holiday week, western New York state was hit by a snowstorm, ...

After 73 years, Biden tells Palestinians to wait until conditions are right

NEW YORK CITY: Granting Palestine full state membership status at the UN would be a "practical" step that could preserve ...

WASHINGTON D.C.: In the largest dam removal undertaking in U.S. history, a U.S. agency last week approved the decommissioning of ...

LONDON: In a bid to raise tens of billions of pounds to fill a major shortfall in public finances, the ...

YANGON, Myanmar: Myanmar's ruling military freed nearly 6,000 prisoners in a mass amnesty this week, including an Australian economist and ...

After large jump in Channel crossings, France and UK agree to act

LONDON, England: The UK and France have signed an agreement to stop migrants from crossing the English Channel in small ...

Prior to the conflict, Berlin believed a long conflict would be a disaster, the former UK prime minister saysGermany was ...

News of yet another deadly shooting at a United States LGBTIQ+ nightclub has again brought hate crime to the forefront ...