Arjun Kapoor, Rakul Preet miss Bhumi Pednekar as they resume shooting for their next film 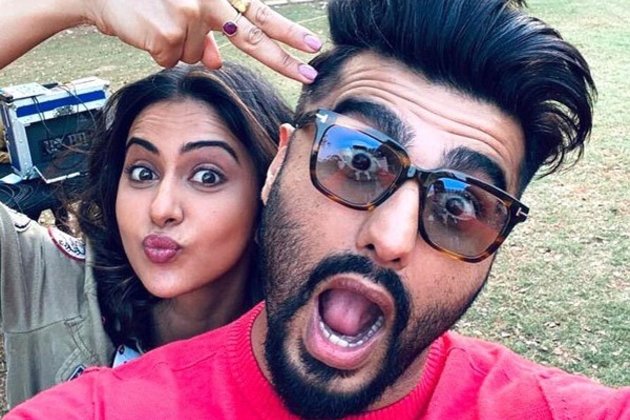 Taking to Instagram, Rakul shared a selfie picture along with Arjun Kapoor on her stories and captioned it," @bhumipednekar ur missed. Chalo mazedar film bnate hain."Replying to Rakul's story, Bhumi wrote, " You guys are really going to miss me the next 5 days. Please keep your emotions together I'll be there in no time."Actor Arjun Kapoor also shared the picture and wrote, "5 days away from @bhumipednekar I'm already feeling rejuvenated."As per reports, Arjun Kapoor, Rakul Preet Singh and Bhumi Pednekar are coming together for a romantic comedy film directed by Mudassar Aziz for which the trio already jetted off to London to shoot the foreign schedule of the film.

Although an official announcement from the makers of the film is still awaited.

Arjun and Bhumi will also be seen in director Ajay Bahl's upcoming film 'The Ladykiller'.

Apart from that, Arjun also has a dark comedy 'Kuttey' alongside actors Tabu, Naseeruddin Shah and Radhika Madan in his kitty which is all set to hit the theatres in January 2023Bhumi, on the other hand, will be also seen in Karan Johar's 'Govinda Naam Mera' alongside Vicky Kaushal and Kiara Advani, which is set to stream exclusively on the OTT platform Disney Hotstar from December 16, 2022.

Rakul, on the other hand, was recently seen in a comedy film 'Thank God' alongside Sidharth Malhotra and Ajay Devgn.

Helmed by Indra Kumar, the film failed to impress the audience at the box office.

She will be next seen in RSVP's next 'Chhatriwali'. (ANI)

King could step in if Malaysia parliament cannot choose leader

KUALA LUMPUR, Malaysia: As support for a conservative Islamic alliance prevented major coalitions from winning a simple majority in its ...

BUFFALO, New York: Just ahead of the busy Thanksgiving holiday week, western New York state was hit by a snowstorm, ...

After 73 years, Biden tells Palestinians to wait until conditions are right

NEW YORK CITY: Granting Palestine full state membership status at the UN would be a "practical" step that could preserve ...

WASHINGTON D.C.: In the largest dam removal undertaking in U.S. history, a U.S. agency last week approved the decommissioning of ...

LONDON: In a bid to raise tens of billions of pounds to fill a major shortfall in public finances, the ...

YANGON, Myanmar: Myanmar's ruling military freed nearly 6,000 prisoners in a mass amnesty this week, including an Australian economist and ...

After large jump in Channel crossings, France and UK agree to act

LONDON, England: The UK and France have signed an agreement to stop migrants from crossing the English Channel in small ...

Prior to the conflict, Berlin believed a long conflict would be a disaster, the former UK prime minister saysGermany was ...

News of yet another deadly shooting at a United States LGBTIQ+ nightclub has again brought hate crime to the forefront ...